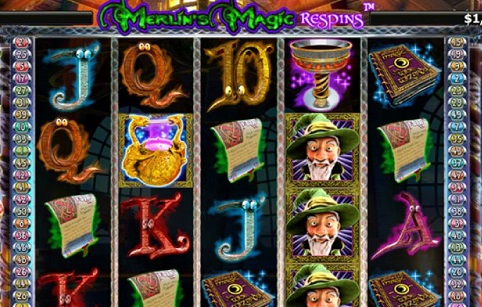 Merlins Magic Respins slot is the sequel to Next Gen’s very popular slot Merlins Magic. This slot has a number of special features including Next Gen’s Super Bet system, stacked wilds and free spins. The game has five reels and fifty paylines all of which are optional and can be played for as little as 0.01 coins up to 2 coins. This makes this a great slot for all players. Experienced players will enjoy the modern animations and decent extra features whilst new players will appreciate the simple layout and ability to spend very little per spin.

Merlins Magic Respins slot is a modern game with modern animations and graphics. The game has a slightly cartoon like style, with lots of bright colours and the main characters being drawn as cartoons. The background to the reels is Merlin’s lab for lack of a better word. Behind the reels can be seen potions, a high wooden ceiling and lots of high windows. The game comes with high quality sound effects and music which are theme based and well worth keeping on.

The symbols in Merlins Magic Respins slot reflect the magical theme. For those who don’t know, Merlin is a very famous Magician. Said to have been King Arthur’s personal magician, Merlin is still hotly debated as to whether he was a historical or purely a fictional character. IN the case of Merlins Magic Respins slot he is very fictional, with a big bobble head and lots of pretty coloured potions and sparkly magic effects. On the reels can be found a telescope, Merlin’s Spell Book, a goblet, a cauldron and a scroll. The base symbols are more likely to be found on the reels of a poker game machine than in a magician’s lab. 10 through to Ace have been done nicely enough but are a bit of a cop out when it comes to the theme. Merlin is the game’s wild and can be found on reels two, three and four during the base game. He will replace all other symbols except the scatter and will also appear stacked to take over an entire reel.

The Super bet feature in Merlins Magic Respins slot is an optional feature that can be selected via a button to the right of the reels. This feature does cost extra but also directly affects the repsins feature in Merlins Magic Respins slot. During the base game round if you have selected the SuperBet function you will be awarded between one and five respins depending on how much you have wagered extra. This is not a cheap feature, as 500 coins will get you only five respins when the feature hits. The stacked wilds can appear on all reels during respins which can result in some large wins.

Merlins Magic Respins slot has a regular scatter symbol in the shape of a cauldron that launches a regular free spins round. Three of these anywhere on the reels will grant you with seven free spins. During this round Merlin will appear on the side of the reels and fire his wand in a nice little animation sequence that ultimately turns some symbols wild. This feature can be retriggered. The wild respins can also hit during the free rounds. So, if you are interested in playing this slot online, you can do it on your desktop and mobile device in the similar way the Cricket World Cup betting is accessed.