If you’re looking for ideas for your next casino party, look no further than our list of five fantastic casino scenes in film. On the set of a big budget movie no expense is spared when it comes to recreating the look and feel of a real casino, while actors and actresses bring it to life. Each one of these scenes can provide inspiration for a unique and memorable celebration.

Daniel Craig was undoubtedly a good choice for iconic James Bond. The casino scene where Bond comes up against Le Chiffre is gripping and smoothly executed. A lot of casino scenes in films are loud and somewhat overwhelming; this one is quiet and understated in comparison. The poker table is the centrepiece – and could also serve as such at a casino party. The feel is one of elegance and sophistication – a subtle undercurrent of affluence, the opposite of flamboyance. The classy decorations (accompanied by a bar) would be fitting for any dinner party.

German experimental thriller Run Lola Run follows a young woman in her attempt to save her boyfriend’s life by getting her hands on 100 000 Deutschmarks, without which his boss will have him killed. A series of time loops ensues, one of which shows Lola playing roulette. One striking element of this scene is the geometric flooring and sombre players, in stark contrast to Lola’s died red hair and tank top. The iconic spinning roulette table could be a fantastic focal point for a casino-themed party – whether it be a decorated table or individual place settings.

Matt Damon has become the face of action thrillers and in this scene he is joined by veterans John Malkovich and Edward Norton. In contrast to the formal settings in the previous two films, this poker game takes place in a more casual environment, the players wearing jerseys and jackets. If you’re planning a casual, game-oriented get together this could be the vibe you’re looking for – comfort over immaculate appearance, snacks and no pressure. This is about the skill of the game, not a fancy façade. 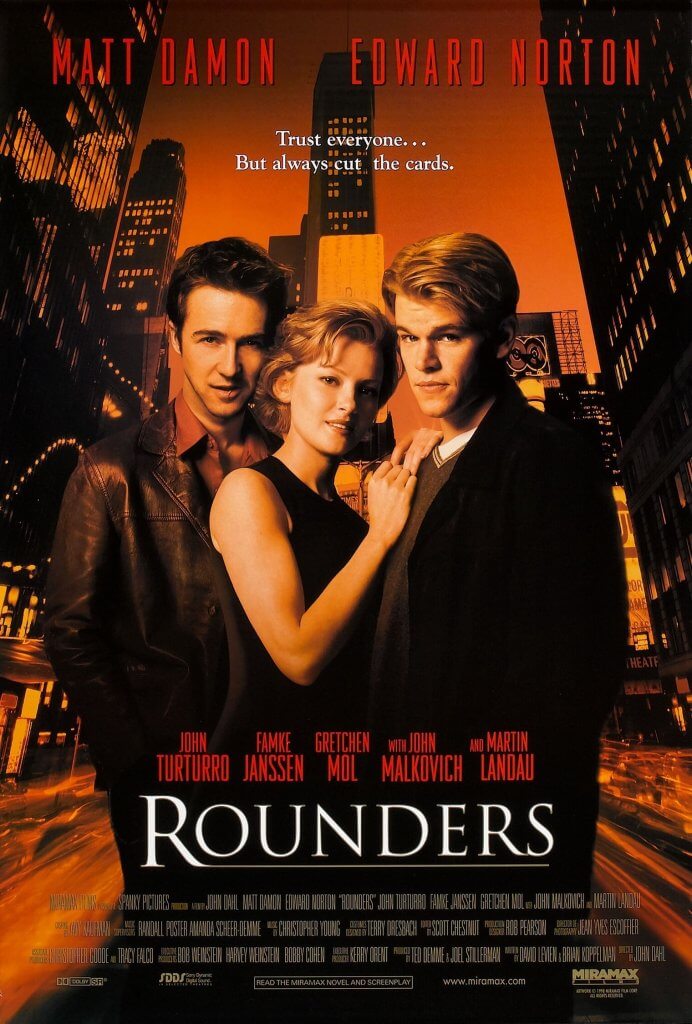 Beginning with Brad Pitt’s character having a drink at a pole-dancing club, this idea could set the scene for a party with a bit of an edge. It feels like a casual game played among friends – but with a hefty bet on the table. Pole dancers remain as a backdrop, and if you’re looking to have a casino-themed hen or stag do, this could provide a wealth of inspiration.

“Place your bet… there can only be one winner!” This casino scene is full of energy and dazzle. The atmosphere is a combination of urgency and fun as the die are manipulated. This scene has a multitude of ideas for a party – colours, décor, music and more.

These film clips offer many ideas that could help take your casino-themed celebration to the next level. What better way to plan than by emulating cinematic artists?